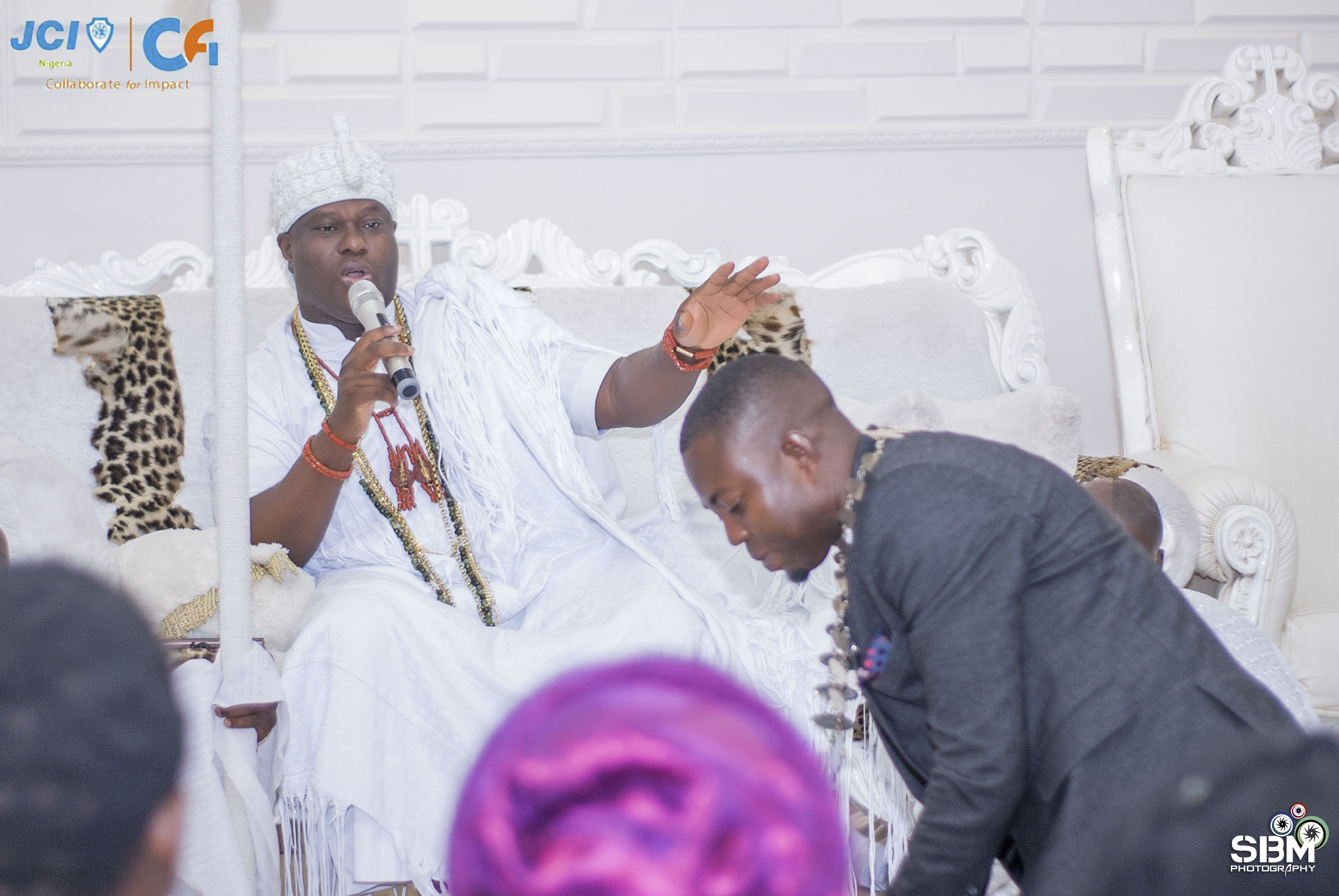 The National President and the delegates arrived at the palace at about 12pm, and were taken on a tour of the palace. It was a very insightful tour as the tour guide took on the historical antecedents of the ancient city of Ile-Ife and the throne leading to the present Ooni.

His Imperial Majesty was ushered into the royal hall at about 4:00 pm and the ceremony of introducing guests and visitors to the king began. When it was time to present members of JCI Nigeria to the King, Mr Tiamiyu gave a brief introduction about what JCI Nigeria is all about the membership strength and the impact of the organisation in the Nigerian clime over the years. The Executive Secretary, in person of Mr Adeyemo Adeonipekun introduced all members present on the delegation, to the royal gathering. Afterwards, the 2019 President gave a brief remark about the antecedents of JCI Nigeria’s visit to the Ooni’s palace and that the present leadership of the organisation considered it expedient to leverage on the already existent relationship with the king through the courtesy visit. Mrs Akinola appreciated the king for his warm reception and audience and went on to usher me in to make known, the purpose of our visit to the king.

In the National President’s expositions of the intent of the visit to His Imperial Majesty, He made mention JCI Nigeria’s various contributions to development of the Nigerian youth, in collaboration with relevant stakeholders and I solicited for the kings assistance for collaborations with the palace as well as his networks. He also made mention of JCI Nigeria’s permanent secretariat building project and went on to state that the organization already acquired a mass of land at the New Makun City along Lagos-Ibadan express road. It is worthy of note that he also presented the proposition for youth development in the Ife community where the organization would have a designated building for different entrepreneurial and empowerment programs taking place. The structure would serve as a means of training young people in the Ife community and equipping them with the necessary entrepreneurial and leadership skills.

JCI Senator Abiodun Oyeleke was also given the opportunity to make a brief remark, where he went on to appreciate the king for the warm reception and acknowledged the strength of his leadership in the Yoruba land.

All members of the delegation were ushered before the royal throne to pay obeisance, during which a gift was presented by the National President to the Ooni and thereafter, he addressed the delegation. The Ooni in his response to our propositions assured his continuous support to the organization in every way within his means, especially with respect to the youth empowerment driven initiatives of JCI Nigeria. He appreciated the delegates for the courtesy visit and afterwards handed the delegates to a royal aide to be treated to a warm feast before the team embarked on the journey back to various destinations. The delegates left the palace at about some minutes past 5 pm.